The New Inn St Johns Wood is a traditional styled British pub with 5 bedrooms for guest accommodation. Something very different from the vast majority of bed and breakfast hotels. The Inn has a long history having originally been built in 1810 and today its a gastro pub providing a brasserie style quality menu which covers breakfast, lunch and dinner. Also serves a range of freshly prepared worldly tapas bar snacks.
In total there are 5 bedrooms which are configured as 3 doubles and 2 twins.
Each of the rooms has a private bathroom, television with freeview channels, fan, WiFi, tea/coffee facilities and hairdryer.
All rooms are non-smoking.

The pub serves fine English ales, international beers and excellent wines and spirits.
Complimentary wireless internet access throughout. The pub has an outdoor area which is open in the summer months. Please note that there is no lift and access to the rooms requires climbing 18 steps.

Nearest: Tube Station: St.Johns Wood 0.4 miles (0.6 km), Railway Station: South Hampstead 0.7 miles (1.1 km), Motorway: M1 Junction 1 3.7 miles (6 km).
The New Inn London is located in the residential district of St Johns Wood, very close to to one of the most expensive roads in the UK, Avenue Road. This is a smart residential area with a cosmopolitan population. Just 350 yards to the west is the village like and bustling St Johns Wood High Street. Although a high street by name its not actually a man through route giving it its intimate feel. It full of small shops with bars and restaurants and is upmarket in feel. 160 yards south of the New Inn is Regents Park, a large open area with play areas, an open theatre and home to London Zoo. A similar distance to the east is another popular park, Primrose Hill, which offers some great views over central London. Other notable nearby places of interest include Lords Cricket ground (0.4 miles) where major cricket matches take places and incorporates a cricket museum. Abbey Road studios where the Beatles used to record is half a mile to the west. While St Johns Wood High Street offers a good range of amenities there is major shopping and facilities on the Finchley Road, 3/4 of a mile north. This is also where you will find the O2 centre with its shops, bars and multi cinema. Just 1 mile from the ever popular Camden Market. Bedroom Numbers: 5
Check-in: 14.00 till 22.00 (2 pm till 10 pm)
Check-out: 11.00 This hotel has averaged a score of 4 out of 5 by 226 past guests
>>>Tripadvisor (ranked 137 of 743 for B&Bs / inns in London and rated 4 out of 5 from 226 reviews)

Complimentary wireless internet access throughout. Compared to other London hotels: This hotel has been rated 80% by past guests. The London average is 79% and the average for 3 star hotels is 66%. Therefore this hotel is well above average for its sector (star rating) and for London as a whole.
Milesfaster ranking: 608th from 865 London hotels, and 197th of 321 three star rated hotels.

Another to Consider: A similar hotel nearby (0.8 miles, 1.2 km) would be the 3 star Americana Hotel , where rates start from £79 and which has a 72% guest satisfaction rating. The Americana Hotel also offers: free WiFi.
If you are looking for something a bit cheaper then take a look at the So Paddington Hotel. 1.4 miles from the New Inn St Johns Wood (2.2 km), has been rated at 53% by past guests and has rates from around £62.
Something close by with a great client rating? We suggest the 4 Star Holiday Inn Camden Lock may well be of interest to you, it's only 0.9 miles (1.4 km) from here. A highly rated hotel with a guest score of 89%. 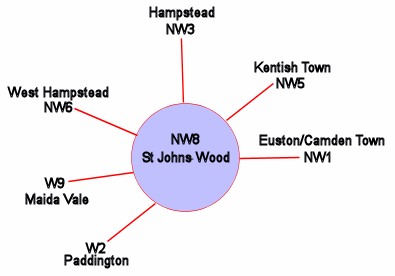