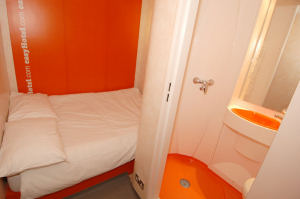 >>>Check Hotel Rates<<<
There are many budget hotels in the Fulham area, other hotels of the same type include the Ibis Earls Court, the Holiday Inn Express Earls Court and the Best Western The Boltons Hotel.

First opened in mid 2009 the Travelodge Fulham provides basic but budget priced accommodation close to central London.
Bedrooms have a Flat screen TV and desk and all are en-suite.
There is no breakfast service within the hotel but many restaurants are nearby along with grocery stores as another option.
Vending machines in hotel dispensing drinks, snacks and essentials such as shampoo and toothpaste. Portable fans and hairdryers can be requested (subject to availability). Please note that the hotel does not have luggage storage facilities.
Its possible to check in early and check out late but the hotel makes a small charge for this service. This is an all no-smoking establishment.

Nearest: Tube Station: Gloucester Road 0.3 miles (0.5 km), Railway Station: West Brompton 0.6 miles (1 km), Motorway: M4 Junction 1 3.8 miles (6.1 km).
The Travelodge London Fulham sits on the busy North End Road. This is a major cut through for traffic and because of its size and market stalls can get quite congested. On the plus side it is a busy high street with lots of shops and stores (Iceland supermarket below) and other amenities such as bars and restaurants (including a McDonalds a few doors down). This location can be thought of as marking the western border of central London. Though not on top of the main tourist districts such as the West End its quite accessible thanks to the nearby tube station at Fulham Broadway (10 minutes walk) and leads down to other major shopping roads such as Fulham Road and Kings Road Chelsea. Bus routes pass by the hotel for more central areas. Within 1 mile you have to major football grounds, Chelsea FC (0.5 miles) and Fulham FC. The Travelodge is well placed for the Earls Court development complex which is less than half a mile from the hotel while Olympia is within a mile. 0.5 miles to the north is the A4 dual carriageway which links with Heathrow Airport in around 25 minutes for a normal run. Nearby places of interest include the Tardis outside Earls Curt Tube (0.7 miles), Museum of Fulham Palace (1 mile), Leighton House Museum (1 mile) and Holland Park (1.2 miles).Wireless Internet: 30 minutes internet access is complimentary (no charge), 24 hours is £3, 1 week is £12, 2 weeks is £20, 1 month is £35 Parking: Not onsite.
Bedroom Numbers: Check-in: 15.00 (3 pm)
Check-out: 12.00 noon This hotel has averaged a score of 3.4 out of 5 by 1074 past guests
>>>Booking.com (average customer rating 3.2 out of 5 from 450 reviews)
>>>Tripadvisor (ranked 124 of 1771 for Specialty Lodging in London and rated 3.5 out of 5 from 624 reviews)

Pets are not allowed. Compared to other London hotels: This hotel has been rated 67% by past guests. The London average is 79% and the average for 2 star hotels is 70%. Therefore this hotel is below average for its sector (star rating) .
Easy Hotels have an average guest rating of 64%. The easyHotel South Kensington with its rating of 67% is therefore not just well above average for this chain but is our highest rated Easy hotel.
Milesfaster ranking: 777th from 865 London hotels, 1st of 3 Easy Hotels, and 47th of 71 two star rated hotels.

Another to Consider: Also close by and a similar hotel (1.0 miles, 1.7 km) would be the 3 star Icon Hotel Luton, whose lowest rates start at about £49 and which has an 89% guest satisfaction rating. The Icon Hotel Luton also offers: free WiFi.
For a hotel that offers lower base rates take a look at the Premier Inn Luton Airport. 0.4 miles from the Travelodge Fulham (0.6 km), has been rated at 80% by past guests and the hotels starting rates begin at about £35.

The 50 nearest hotels around this area (290-302 North End Road, SW6 postcode) which we have have on our website extend out to a 1.0 miles (1.7 km) radius. Consisting of 3 five star hotels (average rating 88%), 20 four star hotels (average rating 82%), 22 three star hotels (average rating 73%) and 5 two star hotels (average rating 66%). Top 3 star hotel is The W14 Kensington at 83%. Of the 50 local hotels top rated are K+K Hotel George (4 star), The Nadler Kensington (4 star), the Collingham Apartments (4 star), the Hotel Xenia (4 star) and the St Paul's Hotel (4 star) (all 5 are joint top with 90%).
Base Rates: We show you the average starting rates (base rates) in the area and break it down by star rating. Trouble with this is that base rates do not include special offers and limited low rate deals. However they remain a useful guide to general rates. The average base rate when considering all hotels in the surrounding area is £99 per night. Starting from £44 at Lord Kensington Hotel (3 Star, 73%) with top rates of £255 at The Bentley London (5 Star, 88%). Rate averages listed by star level: Five Star average: £228, Four Star average: £113, Three Star average: £77 and Two Star average: £62.
Summary:
Using our in-house algorithm we rank hotels based on guest ratings and weighted for related factors we rank Travelodge Fulham 18th (joint) of 50 area hotels and 2nd (joint) for the 22 three star hotels in the area. We rank the hotel 6th of 50 (4th of 22 three star hotels.) for base rates. We rank this hotel based on rates and also review scores to place it 7th of 47 of all the closest hotels in terms of value for money (St Paul's Hotel was top).