Prior to February 15th 1971 the British currency system was known as pounds, shillings and pence. In the system used at that time 12 pennies was equal to one shilling and 20 shillings was equal to one pound. After February 15th 1971 the UK moved to a new system called decimalisation and brought the currency into line with the metric systems used in Europe which are based on a logical system of 10 or factors of 10's. So with decimalisation came a system of pounds and pence doing away with shillings altogether. UK currency is known as BRITISH STERLING.
Under this system 100 pence is equal to one pound making working with the UK currency far easier. The symbol used for pounds is: £ or is sometimes shown as GBP (Great Britain Pounds) and the symbol used for pence is: p
So two pound forty pence would be written: £2.40 or GBP 2.40
Twenty pence would be written 20p.

Currently the currency in use is as follows:

New Five Pound Note
On September 13th 2016 the UK got its first plastic note, the new five pound note. 15% smaller than the older traditional paper type in use at the time. Its made from a material called polymer which is a flexible thin plastic. The old five pound note no longer being legal tender after May 2017. The new version will last 2.5 times longer making them better value. On the back is the face of Winston Churchill along with his famous quote of "I have nothing to offer but blood, toil, tears and sweat". While the front is still Queen Elizabeth II. 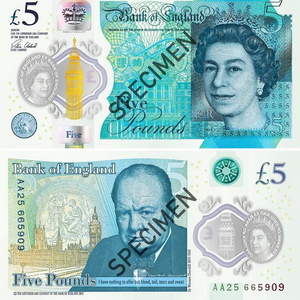 New Fifty Pound
On the 2nd August 2011 a new £50, designed by Chris Salmon, was issued. The note as usual shows the Queen on one side while the other side shows Matthew Boulton and engineer James Watt. Matthew Boulton was a business entrepreneur from the 18th century while James Watt was an engineer perhaps best known for his part in inventing the separate condenser, an improvement on the Newcomen steam engine. Known as an 'F' series note, the first of which was the twenty pound note issues in 2007 (see below). This is the first bank note in the UK to feature two portraits on the reverse side.

New Twenty Pound Note:
On the 13th March 2007 a new £20 note was issued by the bank of England. The last time this note was replaced was 1999. When new notes are issued the old ones continue to be legal tender for a considerable time. Even after that you can still exchange the old notes for new ones at UK banks. In this case the older style £20 note was withdrawn on June 30th 2010.
The new style note shows the image of Adam Smith (eighteenth century economist) which makes him the first Scottish citizen to be shown on a UK bank note. The changes over the last £20 note include a lighter shade of purple and several security enhancements. For example raised lettering and larger hologram and a new security colour tag which shows up under ultra-violet light. Interestingly the £20 note is the most commonly used note.

The UK is does not use the same currency as much of Europe contrary to the belief of many first time visitors. While many countries of the European union use the Euro which came into being on January 1st 1999 the UK has so far decided to continue with its own currency.

Confusingly while the Currency above is issued by the Bank of England and is the official currency for the UK, other banks do issue their own notes. This applies to Scotland and Northern Ireland with the banks issuing notes being:
Scotland: Clydesdale Bank, Royal Bank of Scotland and Bank of Scotland
Northern Ireland: The Bank of Ireland First Trust Bank Northern Bank Ulster Bank
These banks produce £100 notes which are not produced by the Bank of England.

Many people outside of Northern Ireland and Scotland are not familiar with these local notes and they are sometimes refused as acceptable payment in England. However they are perfectly acceptable as payment anywhere in the UK.