Heathrow Transport
Heathrow Hotel Hoppa Local Buses/Freeflow Central Bus Station Bus and Coach Services Railair Bus Links
Gatwick Transport
Bus and Coaches Trains
National Express run a high frequency service over 100 times a day between Heathrow Airport and Gatwick Airport (North & South Terminals). Very popular as a transfer option as there is no competing rail service.
The route taken is via the M25 which means there's some good and there's some bad. The good news is that when the route is clear it means the airports are linked by motorway without needing a journey through central London and its almost a non-stop journey. The bad news is that the M25 has a reputation for being one of the most congested motorways in the UK with seemingly never ending roadwork's on one section or another. So this can leading to a wide variance from advertised travel times. However something to note is that congestion is more normally limited to working hours on weekdays between 8am and 6pm. It will also vary greatly depending on your direction of travel. The National Express coach from Heathrow to Gatwick via the M25 is an anti-clockwise journey while the Gatwick to Heathrow leg is a clockwise journey. This is important to note because congestion is heaviest in an anti-clockwise direction in the evening (3pm to around 7pm) and in a clockwise direction in the morning (7am to 11am).
National Express to Gatwick operates from all 4 terminals and both Gatwick terminals in the opposite direction. This means for Heathrow terminals 2 and 3you must make your way to the central bus station. Reckon on a 10 minute walk using the underpass under each terminal and clearly signposted.

All coaches have an onboard WC and the 200 and 201 have NXTV.
Service operates close to 24 hours a day (02.30 till 00.30). The service from terminal 4 is less frequent than from the central bus station and terminal 5 (part of the same route), up to every hour compared to ever 20 minutes from the central bus station (terminals 1,3 and 5). You can use the Heathrow express to get from terminal 4 to Heathrow terminals 2 and 3for free and it takes just a  few minutes.
Order of terminals visited:
Heathrow to Gatwick
Terminals 2 and 3(central bus station) > Terminal 5 > Gatwick North Terminal > GATWICK South Terminal
Terminal 4 > Gatwick North Terminal > GATWICK South Terminal
Gatwick to Heathrow
The revere of the above routes.

Quick Facts
National Express are the number one operator for UK wide coaches.
Purchasing tickets online means you receive an emailed e-ticket. Emailed almost immediately so very little time delay no matter where you are in the world.
Options to reserve a seat, but only when you specify the exact time of the scheduled coach.
Big savings for return tickets.
One child under 3 years of age may travel free for each fare paying passenger adult.
Children 3-15 have reduced fares.
Children under 14 must be accompanied by an adult.
Luggage allowance is 2 medium sized suitcases up to 20 kg each and one item of hand luggage.
Additional luggage is allowed (normally) but with a surcharge.
>>>National Express Timetables 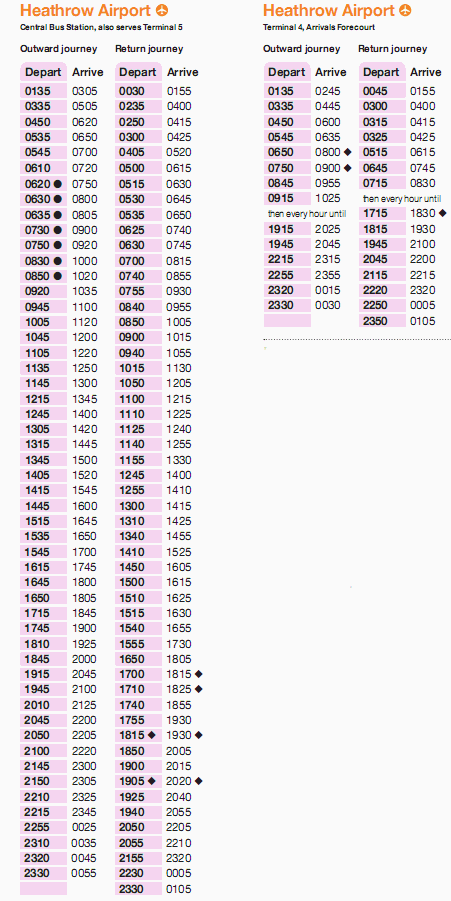