Of all the options for transfers between Luton Airport and Heathrow Airport by far the most practical and also the most economical is the National Express coach service that runs along the M25 between the two airports. In fact for a direct service you have no other options other than a taxi. The train connection requires at least one change of train. The route taken by the coach is the orbital motorway that encircles greater London. So this also means certain times of the day you are going to hit more traffic than other times and this is basically the morning and evening rush hours. In general the clockwise run is heaviest in the evening (Heathrow to Luton) and the anti-clockwise run is heaviest in the morning (Luton to Heathrow). However the airports junctions are always busy in rush hour.
The coach serving this route is the 707
Things to note for this route:
Does not operate 24th or 26th December.
reduced service bank holidays.


National Express from Luton Airport
Coaches run from Luton Bus Station in Luton town itself before arriving at the airport. At Luton Airport the coaches stop right outside the terminal building (there is only one terminal though its split into two sections). You cant miss the National express coach as the bus forecourt isn't overly large and all the stops are clearly signposted. The service operates from about 01.45 till around 23.45 and this is a mostly hourly service. All coaches have an onboard WC. These are not dedicated buses for this route but they take in this journey as part of much longer routes. the full route is actually Northampton to Gatwick Airport.
The service is the number 707 coach. Pickup is from outside Luton Airport terminal, then on to Hemel Hempstead bus station and then taking the M25 to Heathrow Central bus station (for terminals 2 and 3), After stopping at the central bus station the coach then stops at terminal 5 and finally terminal 4. Thus serving all terminals at Heathrow airport.
Note that the same National Express Luton Airport to Heathrow Airport bus then goes onto Gatwick Airport.

National Express timetables, services and fares
Quick Facts
National Express are the number one operator for UK wide coaches.
Purchasing tickets online means you receive an emailed e-ticket. Emailed almost immediately so very little time delay no matter where you are in the world.
Options to reserve a seat, but only when you specify the exact time of the scheduled coach.
Big savings for return tickets.
One child under 3 years of age may travel free for each fare paying passenger adult.
Children 3-15 have reduced fares.
Children under 14 must be accompanied by an adult.
Luggage allowance is 2 medium sized suitcases up to 20 kg each and one item of hand luggage.
Additional luggage is allowed (normally) but with a surcharge.
>>>National Express Timetables 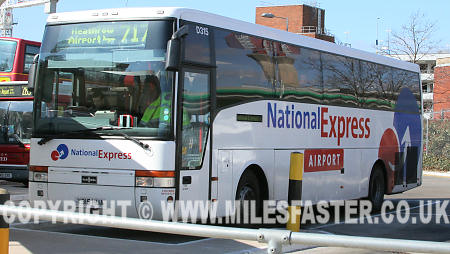