The Draycott sets out to combine the splendour the grandeur of the past with the luxuries and amenities of today. A small, elegant and intimate boutique hotel with an elegant style. The red brick building is a former Edwardian residence (built in 1890) and today many of the original features remain such as high ceilings and real fireplaces. Each of the bedrooms has its own theatrical theme and is named after famous thespians of the past. Furnished with Victorian antiques along prints, posters, photographs and a small biography of the rooms namesake. Experience true classic British service and traditional hospitality, old school style and charm at this award winning luxury boutique hotel.

The Draycott Hotel offers 35 bedrooms all well appointed and individually decorated. Each room is theatrically themed and adorned with Victorian antiques and are named after famous actors of the past such as Sheridan, Coward, Grenfell and Ashcroft. All guest rooms are furnished with memories of the past from photographs to biographies. Many rooms (at the rear) have views over the quiet private Cadogan Garden square below to which guests have exclusive access.
All rooms are ensuite with bath and power shower (plus fluffy bathrobes and hairdryer). Room amenities include air conditioning, free wireless internet access, flat screen television, safe, ironing facilities, private bar, desk, sofa, DVD and CD music system. Suites come with a fully fitted kitchen. All beds are luxuriously large have Sea Island cotton sheets. All rooms have a working fireplace.
Deluxe doubles and suites have an iPod docking station.
The Draycott suite is 960ft² (89m²)
The Deluxe Garden view rooms are 380ft² (35m²)
Suites average size is 471 ft² (44m²)
Deluxe Doubles are 380ft² (35m²)
Superior Double is 340m² (31m²)
Standard Queen rooms 200ft² (18m²)
Single rooms are 123ft² (12m²)
Room service is 24 hours serving a selection of hot and cold dishes.


The hotels Concierge Team are on hand 24 hours a day. Complimentary WiFi can be picked up throughout the hotel.

The Draycott Hotel has a theatrically themed breakfast/dining room but does not have a formal restaurant though the surrounding area offers a large selection restaurants. Cooked breakfast served daily.
Complimentary tea and homemade biscuits are served at 16.00 in the drawing room, free Champagne is served at 18.00, free hot chocolate and biscuits at 21.30 and there is an honesty bar in the hotel lounge.
Traditional Afternoon tea is served from noon. Options include Sandwiches (Salmon, Cucumber and cream cheese and Coronation chicken), Scones (fruited or plain served with strawberry jam, butter and clotted cream), Sweets (Macaroons,  Panna cotta with biscuit crumb topping, Fruit tart with flavoured cream, Victoria sponge, Lemon drizzle).
Unlimited choice of loose leaf teas or coffees.

The hotel has a meeting room suitable for up to 12 guests.
Rather than the usual hotel lobby the Draycott has an informal reception hall where guests are welcomed. Banquettes and cosy armchairs provide the perfect environment for a pre-dinner drink or perhaps an afternoon snooze for weary shoppers.

There is a 24 hour reception desk Concierge service for London theatre, dinner bookings and local information. Console and accompanying games available. PC computer for guest use. The Draycott Hotel has a lift and offers luggage storage, shoeshine, ironing service, Dry cleaning and Laundry.

Nearest: Tube Station: Sloane Square 299 yards (273 metres), Railway Station: London Victoria 0.7 miles (1.1 km), DLR Station: Tower Gateway 3.9 miles (6.3 km), Motorway: M4 Junction 1 5.1 miles (8.2 km).
Made up from three Edwardian homes originally built in the 1890's is the Draycott Hotel London. Centrally located slightly West of centre and close to some of London's most popular and fashionable shopping areas at Kings Road, Chelsea and Sloane Street. Cadogan Gardens is located in an upmarket residential area. Transport links are good with a taxi always to be found in the nearby Sloane Square where you can also catch a bus or tube ride. Nearest attractions include the Royal Court Theatre, Harrods, Albert Memorial, Hyde Park, Victoria and Albert Museum, Science Museum and Queens Gallery. Bedroom Numbers: 35
Check-in: 14.00 (2 pm)
Check-out: 11.00 am This hotel has averaged a score of 4.5 out of 5 by 1210 past guests
>>>Booking.com (average customer rating 4.6 out of 5 from 265 reviews)
>>>Tripadvisor (ranked 67 of 1140 for Hotels in London and rated 4.5 out of 5 from 945 reviews)

Pets are not allowed.
More hotels from this chain
If your not looking for anything except the Preferred chain nearby from this brand are:
The Hari London: is 0.3 miles (0.5 km) away, has a guest satisfaction score of 97% and rates start from about £264.
Franklin Hotel London: is 0.4 miles (0.7 km) from here, earns a customer rating of 91% and base rates begin at about £259.
Pelham Hotel: 0.6 miles (1.0 km), rated at 89% and with rates from around £210.
The Bentley London: 1.0 miles (1.7 km), rated at 88% and with rates from around £255. Compared to other London hotels: This hotel has been rated 90% by past guests. The London average is 79% and the average for 5 star hotels is 89%. Therefore this hotel is above average for its sector (star rating) and for London as a whole. Preferred Hotels across the chain average 90% so this hotel is rated as average when compared to other Preferred hotels.
Milesfaster ranking: 120th from 865 London hotels, 6th of 11 Preferred Hotels, and 54th of 133 five star rated hotels.

Another to Consider: Another hotel that is much like the Draycott Hotel and not too far away (0.3 miles, 0.4 km) would be the 5 star Belmond Cadogan, where prices begin from around £552 and which has a 98% guest satisfaction rating. The Belmond Cadogan also offers: free WiFi, a gym.
Looking for lower base rates? Then another option might be the The Exhibitionist Hotel. 0.8 miles from here (1.3 km), achieving a rating of 81% by its past clients where rates start from approximately £103.
Fancy something highly rated by its guests? We think the 5 Star 41 Hotel could be a good choice, it's only 0.8 miles (1.3 km) from here. The 41 Hotel has a perfect unblemished customer rating 100%, a truly stunning achievement.

The closest fifty hotels around this area (26 Cadogan Gardens, SW3 postcode) that are listed on this website cover a 0.8 miles (1.3 km) radius. The numbers for each star rating are 27 five star hotels (average rating 91%), 13 four star hotels (average rating 83%), 8 three star hotels (average rating 69%) and 2 two star hotels (average rating 72%). The highest rating goes to 41 Hotel (5 star) at 100%.
Base Rates: We look at what the average base rates are for the area and by star rating. These rates do not take account of offers and short term deals so are just a guide.
For the fifty local hotels we hold base rate data on 49 of them. If we look at the average for all hotels in the area (nearest 50) we get an average base rate of £229 per night. The lowest rates are at £59 at Dover Hotel (2 Star, 74%) and highest base rates of £752 at Bulgari Hotel London (5 Star, 90%). Averages for each sector of star rating: Five Star average: £305, Four Star average: £163, Three Star average: £95 and Two Star average: £65.
Summary:
We rank hotels based on our own proprietary algorithm based mainly on guest ratings but adjusted for influencing factors. We rank Draycott Hotel 13th (joint) of the 50 local hotels and 11th (joint) for the 27 five star hotels in the area. The hotel is 18th of 49 (3rd of 26 five star hotels.) for lowest standard rates locally. Looking at the hotels rates plus its user rating we rank it 6th of 42 for sheer bang for buck (Egerton House Hotel was top). Comment: Finoa Duncan writing for the Telegraph (21st February 2010) named the Draycott as one of the UK's cosiest hotels. 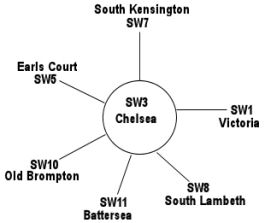