They also have a restaurant and bar serving breakfast, lunch, dinner, snacks and refreshments. Breakfast is a choice from continental, all all you can eat option for full English or a grab and go option of a croissant and tea or coffee.
Family rooms that sleep four are available with cots should you need them. Front desks are manned 24 hours a day.

The onsite restaurant at the Premier Inn London Stratford is the Thyme restaurant and the hotel also has a modern bar as well as vending machines for snacks at any time. The hotel bedrooms have air-conditioning, flat screen television and high speed wireless internet access (free).
Luggage storage is provided and there is a lift for floor access. There is also a convenient cash machine.
Note that you are not permitted to smoke in any part the hotel including the bedrooms.

Nearest: Tube & Railway Station: Stratford (London) 158 yards (144 metres), DLR Station: Stratford 0.2 miles (0.3 km), Motorway: M11 Junction 4 4 miles (6.4 km).
The Premier Inn Stratford is in a privileged location being on the top level of Europe's largest shopping complex, Westfield Stratford City, adjacent to the Queen Elizabeth Olympic Park and right by the international railway terminal of Stratford. The station links with St Pancras and the Docklands Light Railway. Westfield offers 2.9 million square feet of retail and leisure space and its between the Olympic Stadium and Stratford International station. Bedroom Numbers: 267
Check-in: 14.00 (2 pm)
Check-out: noon This hotel has averaged a score of 4.5 out of 5 by 3655 past guests
>>>Booking.com (average customer rating 4.4 out of 5 from 88 reviews)
>>>Tripadvisor (ranked 324 of 1140 for Hotels in London and rated 4.5 out of 5 from 3567 reviews)

Pets are not allowed.
More hotels from this chain
You may be thinking your only preferred choice is still going to be the Premier Inn chain your closest choices would be:
Premier Inn Docklands Excel: is 3.0 miles (4.8 km) away, has a guest satisfaction score of 90% and rates start from about £69.
Premier Inn Hackney: is 3.1 miles (4.9 km) from here, earns a customer rating of 90% and base rates begin at about £79.
Premier Inn Ilford: 3.2 miles (5.1 km), rated at 80% and with rates from around £83.
Premier Inn Barking: 3.3 miles (5.3 km), rated at 80% and with rates from around £54. Compared to other London hotels: This hotel has been rated 90% by past guests. The London average is 79% and the average for 3 star hotels is 66%. Therefore this hotel is well above average for its sector (star rating) and for London as a whole. Premier Inn Hotels across the chain average 85% so this hotel is one of the better rated Premier Inn hotels.
A massive 24% above the average for 3 star hotels, 11% for Greater London and 5% above the average for the Premier Inn chain makes this a top pick and highly recommended hotel.
Milesfaster ranking: 87th from 865 London hotels, 2nd of 65 Premier Inn Hotels, and 9th of 321 three star rated hotels.

Another to Consider: Another hotel that is much like the Premier Inn Stratford and not too far away (0.4 miles, 0.7 km) would be the 3 star Holiday Inn Express Stratford, where prices begin from around £129 and which has an 85% guest satisfaction rating.
For somewhere with lower starting rates try the Holiday Inn Express Stratford. 0.4 miles from here (0.7 km), gaining a satisfaction rating of 85% from its past guests and the hotels starting rates begin at about £129.
Prefer a tried and tested hotel close by judged by its guests ratings? We think the 5 Star Batty Langley's stands out in that regard, and some 3.5 miles (5.7 km) from this hotel. The Batty Langley's has an extremely high guest rating of 96%, one of the best rated London hotels. 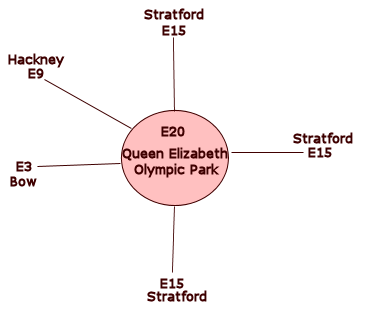