Nearest: Tube Station: Bow Road 0.03 miles (0 km), DLR Station: Bow Church 0.2 miles (0.3 km), Railway Station: Hackney Wick 1.1 miles (1.8 km), Motorway: M11 Junction 4 5.4 miles (8.7 km).
Located in East London is the Hotel Citystay. Small hotel that is well located for the Olympic Stadium (0.8 miles), the Docklands/Canary Wharf area (1.5 miles), the Blackwall Tunnel (1.8 miles) and the ExCel Exhibition Centre (2.7 miles). The Blackwall Tunnel is the major crossing point for traffic going north/south across the River Thames in East London. This part of London is quite a mix, both culturally and in the types of areas to be found there. From some of London's poorest areas to to the richest around the Docklands and Isle of Dogs. Just under 5 miles form the tourist heart of London which can be accessed via the tube which is almost opposite the hotel. Westminster is 12 stops away. Local places of interest include the Ragged School Museum (0.7 miles) (once London's largest Ragged School it now offers visitors a slice of Victorian life), London Gas Museum (0.9 miles) (appointment only), V&A Museum of Childhood (1.3 miles), Museum of the Docklands (1.4 miles), Billingsgate Fish Market (1.5 miles) and the Millennium Dome/O2 Arena (2.1 miles).

Located next door to the Bow Church DLR station.
All bedrooms have private bathroom facilities (shower). Inside your room you'll find amenities such as free WiFi internet access and flat screen television.
The Hotel Citystay has a fully equipped kitchen where guests can make use of the self catering facilities.
The hotel has a front desk that is open 24 hours. Luggage storage facilities available.
This is an all non-smoking hotel.
Fax and photocopy services available.
Pets not allowed. Bedroom Numbers: 17
Check-in: 14.00 (2 pm)
Check-out: 11.00 This hotel has averaged a score of 3.15 out of 5 by 1036 past guests
>>>Booking.com (average customer rating 3.2 out of 5 from 762 reviews)
>>>Tripadvisor (ranked 947 of 1140 for Hotels in London and rated 3 out of 5 from 274 reviews)

Private parking is possible on site (reservation is needed) and costs £10 per day.

Pets are not allowed. Compared to other London hotels: This hotel has been rated 63% by past guests. The London average is 79% and the average for 2 star hotels is 70%. Therefore this hotel is below average for its sector (star rating) .
Milesfaster ranking: 811st from 865 London hotels, and 55th of 71 two star rated hotels.

Another to Consider: A similar hotel nearby (1.6 miles, 2.6 km) would be the 2 star Ibis Docklands Hotel, where rates start from £64 and which has an 80% guest satisfaction rating.
We can also suggest a cheaper options nearby which would be the Newham Hotel. 2.7 miles from the Hotel Citystay (4.3 km), has scored 61% from former guests and has rates from around £40 (theres free WiFi too).
Would you prefer to go with something that has scored higher in guest satisfaction ratings? If that is what your after then the 3 Star Qbic Hotel London City seems like a possible option being 2.0 miles (3.3 km) from the Hotel Citystay. A highly rated hotel with a guest score of 88%. 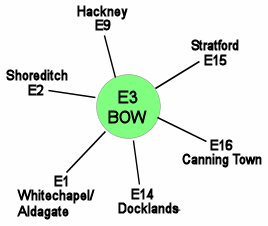