General Information
Route Planners UK Currency London Journey Times International Dial Codes Dialling UK Numbers UK Counties
Each year since March 1981 London has hosted one of the worlds great marathons, not surprisingly called The London Marathon, and Originally setup by former Olympic champion Chris Brasher. Now a huge annual event that always takes place around March/April time from the start of the course at Blackheath in South London with the finnish always down the mall in the grounds of Buckingham Palace. However the finnish has been moved since the first race finished in Constituition Hill and races after that ended on Westminster Bridge till 1994. In it's first year 7,747 runners took part. Each and every year the London Marathon has grown and runners taking part now exceed 40,000. One of the races greatest assets is the mix of fun runners with serious club athletes and world class competitors. You do not have to be an athletics fan to enjoy the spectacle of thousands of runners all in their own personal race against the clock, a great number of who dress in various types of fancy dress in spirit with the nature of the race. The event is a huge fund raiser with many athletes running under sponsorship for charitable and good causes and of course the event itself is also great promotion around the world for London as the countries capital city. During the marathon, always held on a Sunday morning, the roads around the course are blocked off. This however has little impact as only central London is affected and being early on a Sunday there's not much traffic around anyway. 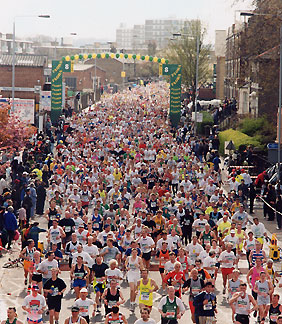