General Information
Route Planners UK Currency London Journey Times International Dial Codes Dialling UK Numbers UK Counties
Londons largest street event, and actually one of the largest in Europe, is the Notting Hill Carnival (and often compared to the Rio Carnival). It is held every year in August and coincides with the summer bank holiday (the last Monday of the month). The event spans three days, Sunday and Monday are the main days with Monday being the biggest attended of all and when close to one million people will attend. On the Saturday is the event known as the 'Panorma', a competition between Steel Bands (among the largest outside of Trinidad) and which now takes place in the nearby Hyde Park.
First held in 1964 the Carnival has grown larger over the years to become a huge multicultural and spectacular celebration. Afro Caribbean music and culture makes up the main displays, food stalls (number in the 100's) and sounds systems. There are also a handful of large fixed stages and many fixed sound systems. Other nationalities represented also include those from South America, Afghanistan, Kurdistan, Bangladesh and the Philippines.  A huge event that is matched by a large police presence of several thousand strong.

The floats take a 3 mile route around the Notting Hill area (Great Western Road, Chepstow Road, Westbourne Grove, Ladbroke Grove ) while Ladbroke Grove is the main focal area. On the Sunday morning the carnival starts with what is called Childrens Day. Aimed at families (somewhat quieter and safer than the main event and with childrens play areas) all the participants in the displays are under the age of 21 and the theme is aimed at teaching the spectators about some of the traditions and cultures that make up the main event. The route taken is also shorter than the main event.

While a hugely successful event attracting visitors from all over the world its less popular with many of its local residents. Each year many take the opportunity for a weekend break rather than face the noise and restrictions they find on their doorstep. Many roads are blocked off to local traffic making it hard for residents to move about as they do for the rest of the year. 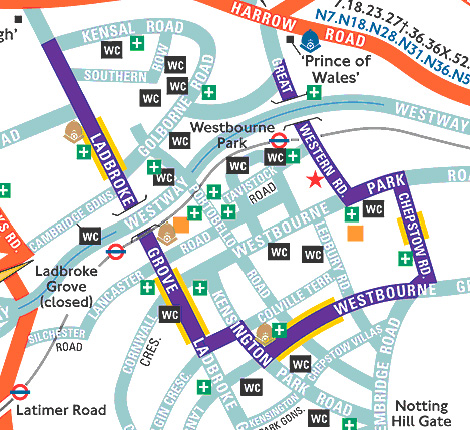